This year has already had some surprising and heroic moments for several Americans. Take a look at some proud Americans from 2019.

On a hot August morning in North Carolina, Lisa Bradley is meticulously updating spreadsheets behind a computer while friend and fellow military wife Cameron Cruse sketches colorful designs on paper in a modest warehouse just outside Fort Bragg.

The two women — both military spouses with master’s degrees — are no ordinary self-starting entrepreneurs. They are a formidable combination of yin-and-yang who founded the handbag company R. Riveter, which provides a vital livelihood for spouses of the U.S. military who otherwise would be struggling to find meaningful work.

The jobless rate among military spouses is five times the national average, and both Bradley and Cruse are all too familiar with the nomadic life of constantly moving to the most current locations where their husbands are assigned. 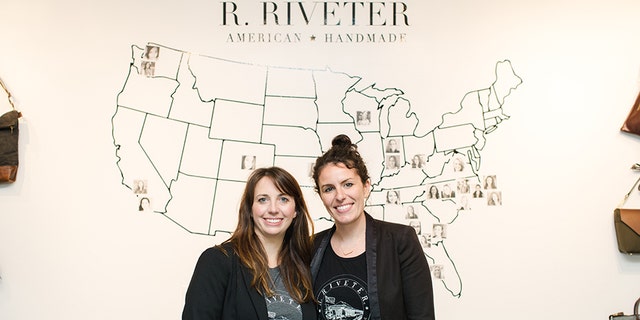 “Being a military family, you’re going to move every two to three years on average,” Cruse, 31, said. “You have to uproot your life and find a new job and a new identity. It takes so much every time you do it that a lot of times military people just give up.”

“We wanted to be part of the solution,” said Bradley, 34, who’s had to move five times in six years.

Using a few scraps of leather and a single sewing machine from the attic of Cruse’s home, R. Riveter was born in 2011. Eight years later, the company — named after Rosie the Riveter, a cultural icon of World War II representing the women who worked in factories and shipyards during the war — is nothing short of an American success story.

“If you’d have told us then that we were going to take on manufacturing retail and military spouse unemployment, I would have told you, ‘you’re crazy,’” Cruse laughed.

From Washington state to Ohio to Florida, some 50 women — known as “Riveters” — cut and sew individual parts of the bags from home and then mail them to the company’s headquarters in Southern Pines, N.C., where workers assemble the pieces in the warehouse.

The finished products are finely crafted leather and canvass handbags sold online and in R. Riveter’s local flagship store. Each bag is stamped with its own unique Riveter ID number and named after an American heroine, such as Margaret Corbin, the first woman to fight in the Revolutionary War and the first woman to receive a military pension from Congress.

“We wanted a different work-from-home opportunity for, really, the modern-day woman who is trying to do it all,” Bradley said. 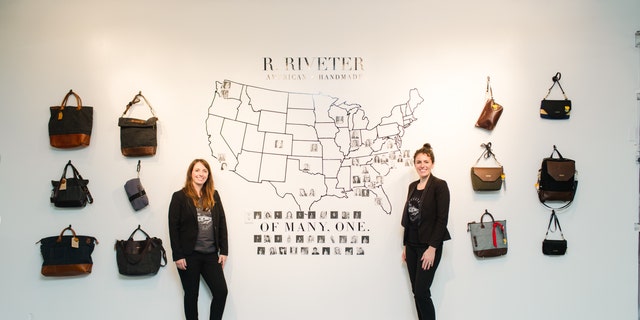 The founders of R. Riveter, Lisa Bradley, left, and Cameron Cruse, with a selection of their products.
(R. Riveter)

“This light bulb went off for us when we thought about all the military families struggling out there — asking what happens when my spouse moves or he or she is deployed or in training and I have to go home and take care of my kids? What about my job?” Cruse added. “And, there was the idea — mobile, flexible income for military spouses.”

“The most important thing about what we do is that military spouses get to make parts and pieces from wherever the military takes them and then they continue to take that work with them wherever they go,” she continued. “So, they get to move from Georgia to Colorado to Washington state and then back to Georgia and never have to let go of that job and that R. Riveter community that they’ve become a part of.”

Now, a third of every dollar spent on the company’s merchandise goes to a military family in need — a detail that caught the attention of Karen Pence, wife of Vice President Mike Pence, who visited the North Carolina factory in November 2018 and lauded the company for creating a business model that “allows [military] spouses to work for them no matter where they live in the U.S.”

For each Riveter, the opportunity to work remotely and provide a steady income, while also becoming part of a nationwide network of other military spouses, has been life-changing.

“It gives me an identity — it gives me something that I can take pride in, knowing that this is going to be a gift and somebody is going to be able to enjoy it for a long time coming,” said Jennifer Campos, a busy mother of five who lives at Fort Benning in Georgia and whose husband has been deployed overseas.

“It’s my own little corner in the world to sit there and enjoy sewing,” Campos said. “And, I’m able to stay home and still be that stay-at-home mom for my kids, which I did for 13 years before I applied to work for R. Riveter.” 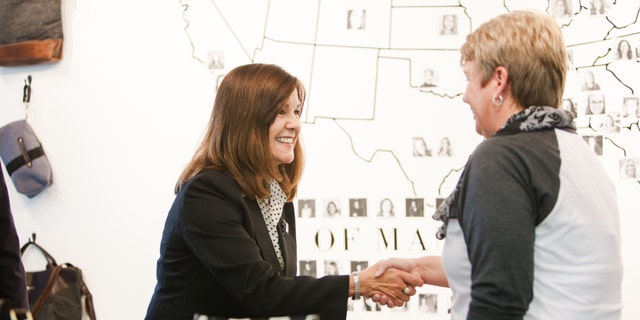 Scotty Geonetta-Inge, who joined the Army when she was 20 and whose husband has been active-duty military, praised the opportunity to work for a company that understood the struggles of military families.

“Being a single mom a lot, with a spouse that’s often gone, this company has helped tremendously because they work around our schedules,” Geonetta-Inge said. “It’s definitely filled a void for me.”

She added, “It also helps out a lot financially. I’m able to keep my daughter in day care. I also have a special needs child. Just working here part-time is so beneficial.”

For Bradley and Cruse, the drive to start their own company has represented a cause greater than themselves.

“This was always for a greater purpose,” Bradley said. “You’re taking on the employment of other people and that just takes it to a whole other level. Failure is not an option.”

“It’s really neat that you can still start something from nothing in America,” she added. “That drive to make a difference and the passion for what you’re doing, you can start from an attic and you can grow a business with just that.”