A Hurricane warning has been issued for a stretch of Florida’s Atlantic coast and a mandatory evacuation of South Carolina’s entire coast was ordered Sunday as powerful Hurricane Dorian threatens the United States.

Around 5:00 p.m. on Sunday, the National Hurricane Center issued its first hurricane warning for parts of Florida related to Dorian.

The storm was about 175 miles east of Palm Beach and moving to the west at 5 mph on Sunday evening.

In a news conference on Sunday, after the Hurricane warning had been issued, Florida Gov. Ron DeSantis said, “We are continuing to make all necessary precautions in urging people out in the state of Florida to make their preparations, heed evacuation orders. This storm has tracked further west, slightly, but still further west than we had hoped.”

DeSantis said Dorian was expected to approach closer to the Florida coast. 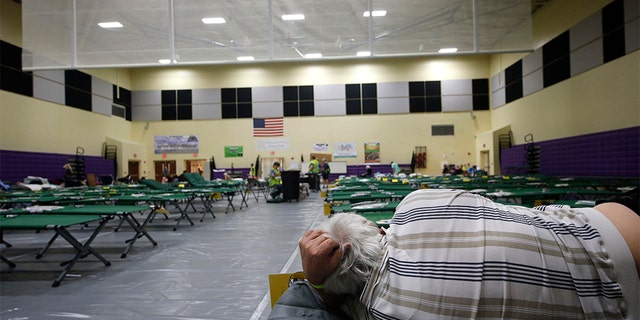 An evacuee on a cot at a shelter for people with special needs on Sunday in Stuart, Fla., ahead of Hurricane Dorian.
(AP Photo/Gerald Herbert)

“The storm has slowed down but we do need it to slow down just a little bit more to ensure when it turns north that it’s not impacting directly the Florida coast. And, we cannot say that that is not a possibility, and so I think it’s important that we prepare for this to potentially make landfall here,” DeSantis said.

In a Facebook post on Sunday, Naval Station Mayport, in Jacksonville, announced it would be evacuated by Monday morning.

South Carolina’s Gov. Henry McMaster’s evacuation order, which covered about 830,000 people, is set to go into effect at noon on Monday. That’s when state troopers are expected to start reversing lanes so people could head inland on major coastal highways. 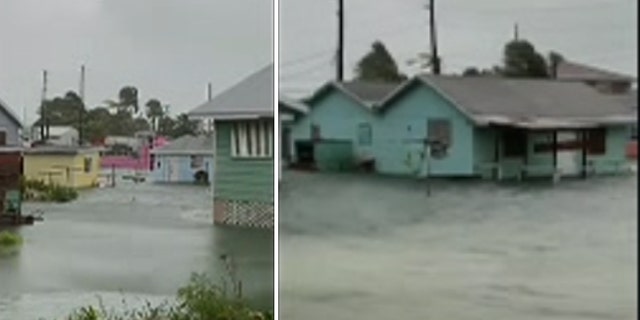 The order will mark the fourth time in four years that hundreds of thousands will be forced to evacuate.

McMaster said he realized some people won’t be happy having to evacuate, but added, “we believe we can keep everyone alive.

In an effort to make sure there enough petroleum products, emergency supplies, and food, Kemp also issued an executive order temporarily suspending federal rules and regulations which otherwise would limit the hours that operators of commercial vehicles could drive.

The Category 5 hurricane battered parts of the Bahamas Sunday with its 185 mph winds, making it the second-strongest storm in the Atlantic Ocean since 1950.

The Category 5 hurricane battered parts of the Bahamas Sunday with its 185 mph winds, making it the second-strongest storm in the Atlantic Ocean since 1950.
(Jason Bethel via Storyful)

Homes missing parts of their roofs, cars overturned and downed power lines have been reported on the Abaco Islands. One video showed floodwaters rushing through the streets of one town.

Bahamas Prime Minister Hubert Minnis said, “you cannot tell the difference as to the beginning of the street versus where the ocean begins” on parts of Abaco. No deaths initially were reported.

The National Hurricane Center has predicted the center of Dorian will stay off shore near the South Carolina coast starting Wednesday afternoon. However, a small error in the forecast could send the eye and strongest winds into the state.

The Associated Press contributed to this report.

‘Will & Grace’ Actors Want to Dox, Blacklist Beverly Hills Trump Supporters — It Does Not Go Over Well – Right Wing Folks
The Amount Of Money Barry “Spread The Wealth” Is Making & Costing Taxpayers Is Infuriating … How Did He Get So Rich? Here’s What We’re Being Told …
To Top